Urinary Tract Infections in the Elderly 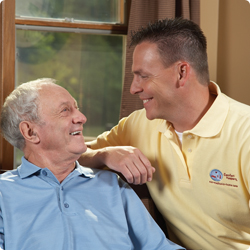 Comfort Keepers takes care of numerous people throughout Dane County, mostly at their homes. Recently an elderly woman whom we were caring for had a sudden change in behavior.  Our caregiver noted she had quickly became confused, agitated and angry and appeared withdrawn, not wanting to engage in conversation or activities. She was unable to explain how she felt or what was troubling her.  Our nurse was called in and immediately took her to a physician who diagnosed the elder with an Urinary Tract Infection (UTI) and put her on an antibiotic regimen. She was back to normal within three days.

Urinary tract infections (UTI) in elders aren't just a nuisance – they can cause serious health problems. A urinary tract infection happens when bacteria in the bladder or kidney multiplies in the urine. Left untreated, a urinary tract infection can become something more serious than merely a set of uncomfortable symptoms. UTIs can lead to acute or chronic kidney infections, which could permanently damage the kidneys and even lead to kidney failure. UTIs are also a leading cause of sepsis, a potentially life-threatening infection of the bloodstream.

The population most likely to experience UTIs is the elderly. Elderly people are more vulnerable to UTIs for many reasons, not the least of which is their overall susceptibility to all infections due to the suppressed immune system that comes with age and certain age-related conditions.

Younger people tend to empty the bladder completely upon urination, which helps to keep bacteria from accumulating within the bladder. But elderly men and women experience a weakening of the muscles of the bladder, which leads to more urine being retained in the bladder, poor bladder emptying and incontinence, which can lead to UTIs.

UTIs can cause sudden confusion in older people and people with dementia. If the person has a sudden and unexplained change in their behavior, such as increased confusion, agitation, or withdrawal, this may be because of a UTI. The person may not be able to communicate how they feel, therefore it is helpful to be familiar with the symptoms of UTIs and seek medical help to ensure they get the correct treatment.

It is also important to be aware that any infection could speed up the progression of dementia and so all infections should be identified and treated quickly.

If a 30-year-old woman experiences painful burning when she urinates, it's almost certain she has a urinary tract infection (UTI). But an elderly urinary tract infection rarely causes such clear symptoms and might not involve pain or discomfort at all. As people age, their immune response changes.  This is a normal part of aging and happens to everyone.

A sudden change in behavior is, in fact, one of the best indicators of a urinary tract infection in elders.  Some common warning signs might include the onset of urinary incontinence, confusion or not being able to do tasks the patient could easily do a day or two before. Anytime there's a sudden change in an older adult, a red flag should go up in a caregiver's mind.  In addition to the other risk factors mentioned, other factors include: those who require a catheter in the urethra and bladder; those who are diabetics; elders with kidney stones and women who've gone through menopause.  If you’re prone to UTIs, don’t take bubble baths.  Avoid alcohol, spicy foods, and caffeine. These can irritate the bladder.

All women who have had a UTI at least once before are also at increased odds of developing the infection again. About 20 percent of women who've had a UTI will experience a second one, and 30 percent of those women will get a third.

UTIs rank as the body's second-most common infection type, UTIs in women-and less often in men-account for about 8.3 million doctor visits each year, according to the National Center for Health Statistics. A bladder infection places stress on the body," says Dr. Mary Ann Forciea, an associate clinical professor for the University of Pennsylvania Health System. That stress can result in confusion and abrupt changes in behavior in older adults with an elderly urinary tract infection. And for people suffering from Parkinson's disease, Alzheimer's disease, or other dementia, "any kind of stress, physical or emotional, will often make dementia temporarily worse," Forciea says.

In most cases, diagnosing and treating an elderly urinary tract infection is relatively straightforward: a simple urinalysis can confirm the infection's presence and, for someone in good health, antibiotics are the first choice of treatment. UTIs often clear up in only a few days. But depending on the age and health of the patient--and the severity of the infection--the course of treatment can take weeks.

Elders living in a group setting such as senior communities or nursing homes are more likely to be resistant to the antibiotics most often prescribed for UTIs such as amoxicillin, and might require something stronger, as well as a longer course of antibiotics to combat an elderly urinary tract infection.

People suffering from UTIs need to drink plenty of fluids to flush the bacteria from their systems. Proper fluid intake makes it harder for bacteria to live and multiply in the urinary tract. But monitor and control your caffeine intake.  Caffeine is a diuretic and increases the volume of urine in the bladder.  The National Center for Health Statistics recommends older adults drink four to six 8-ounce glasses of water a day. Drinking cranberry juice or taking cranberry tablets can also be beneficial. Emptying the bladder completely is very important. Other tips include wiping from front to back and to wear breathable cotton briefs. A technique to empty residual or retained urine having just emptied your bladder can be used in the following manner.

This technique is called ‘Double Void’ which implies two attempts at emptying; however it can be used as many times as you choose to help you empty your bladder more effectively.

Other bladder emptying techniques include: Do not strain to empty your bladder and running water helps some people initiate emptying.  Try turning on a tap if you are having difficulty getting started.

If your loved one's symptoms are consistent with a bladder infection, it is recommended that his or her healthcare provider be called for an appointment the same day that the symptoms are recognized. If it appears the infection might involve the kidneys, call the healthcare provider immediately to consult on whether a trip to Urgent Care or the Emergency Room is necessary.

To notice a UTI in elders really requires detective-like work from the caregiver.  Be alert!