Aging Gracefully: Changes in the Taste Buds and Sense of Smell
Losing your senses of taste and smell may not be fun, but it does not mean that the good life is over.
Six Ways to Help Seniors Prevent Dehydration
Staying hydrated is important for maintaining health and keeping critical bodily functions working properly.
Eat Well, Live Well, Be Well
Good nutrition and regular physical activity in healthy senior adults helps maintain wellbeing.
Age-Related Macular Degeneration (AMD): What Seniors Should Know
Everyone knows of the iris and cornea. But what about the macula? Though it’s one of the smallest parts of the eye (5mm in diameter), the macula plays a significant role in the vision needed to read, write, and even recognize faces.
Why Am I So Cold?

Foodborne Illness: The Risk to Seniors and Prevention at Home 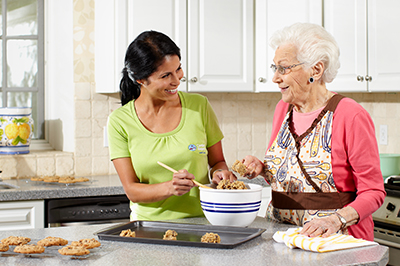 When certain disease-causing bacteria, viruses, or parasites contaminate food, they can cause foodborne illness ─ also known as food poisoning. In the U.S., salmonella, norovirus, campylobacter, E.coli, listeria, and clostridium perfringens are the most common foodborne illnesses.

The Risk to Seniors
As seniors age, it is normal for their bodies to not work as well as when they were younger. Organs and body systems change, and are less able to combat bacteria. That is why seniors who contract a foodborne illness are more likely to have a lengthier illness, undergo hospitalization, or even lose their lives. Here are some key factors that could make older adults more susceptible to contracting a foodborne illness in the first place:

What are the Signs of Foodborne Illness?
The signs and symptoms of food poisoning range from upset stomach, diarrhea, fever, vomiting, abdominal cramps, and dehydration, to more severe illness or even death. Anyone experiencing symptoms of a foodborne illness should call a doctor immediately.

How to Avoid Contracting a Foodborne Illness at Home
Older adults must be vigilant when handling, preparing, and consuming foods, and there are ways to significantly reduce the risk of foodborne illness, especially in the home.

Foods to Avoid
Food poisoning is especially serious and potentially life-threatening for older adults and people with weakened immune systems. They should take extra precautions by avoiding the following foods:

Comfort Keepers® can help. Our caregivers help seniors and others to properly prepare foods for healthy meals – and even help with food shopping. Caregivers will also help with tasks around the home, provide companionship, and help keep seniors safe. Call your local office today.