Keeping a Balanced Diet
Everyone can benefit from eating healthy food and maintaining a well-balanced diet. For seniors, this is especially important. According to the AARP, 60% of seniors are more likely to experience depression because of food insecurity.
Dietary Changes as We Age
One in three hospital patients is malnourished upon admission and almost one-third of U.S. patients (31 percent) experiences declines in nutritional status while in the hospital.
Food Safety for Seniors: Avoiding Illness Through Proper Handling and Storage
The National Institutes of Health (NIH), Senior Health reports that approximately 76 million Americans get food poisoning, or foodborne illnesses, each year, and of those about 5000 die.
Taking Steps to Manage COPD
Learn how to help manage the symptoms of COPD in seniors.
How Seniors can Enhance Mental Health
No matter what age we are, living a life of purpose, connection and joy is critical for our physical and mental wellbeing. For older adults, a variety of obstacles like vision loss, social isolation, mobility problems and memory issues can make enjoying life more difficult.

Drinking Alcohol as We Age

For many of us, drinking alcohol is a tradition. Alcohol is a widely accepted part of our culture and is often a part of our social activities from having a drink before dinner, celebrating with a champagne toast at weddings, having a beer with a hot dog at a baseball game, even to using wine in some religious services. But as we age, drinking alcohol can be more problematic than pleasurable for many reasons that we might not readily even recognize. 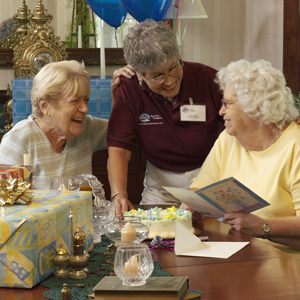 Many people think that a little drinking can be good for you. The National Survey on Drug Use and Health conducted in 2010 found that nearly 40% of adults age 65 and over drink alcohol moderately. In fact, some recent studies indicate that light to moderate drinkers - men who have one or two drinks and women who drink one half to one drink daily -- are less likely to develop or die of heart disease than people who drink more than that or not at all. While it's not clear that moderate drinkers actually enjoy better health, and it is certainly not recommended that nondrinkers start drinking to improve their heart health, caregivers of older adults need to be aware of the potential risks that drinking alcohol poses to senior health and wellbeing.

As a caregiver, it's important to know that a little alcohol goes a long way as we age, even for senior adults who do not have any particular health issues.  As people get older, we become more sensitive to alcohol's effects. The same "couple of beers" that your senior or loved one may have been drinking for years, can affect him or her differently with age.  Why? Our metabolisms change as we get older; consequently, we break alcohol down more slowly so that it remains in our bodies longer. Age also causes the amount of water we have in our bodies to decrease resulting in a higher overall blood alcohol ratio when we drink. Aging also lowers the body's tolerance for alcohol so that we experience side effects like slurred speech or lack of coordination more easily, even if we only drink a little bit.

An estimated 6% to 24% of all falls in older individuals are associated with alcohol. For older men and women who may already have thinning bones, this has serious consequences. Any fall for an older adult is more likely to result in broken bones. And in those aged 70 and older, 50% of all fatal falls, head injuries and falling down stairs are alcohol-related.

Even though their drinking habits may not have changed over the years, older people who have developed health issues over that time can have more serious problems with alcohol. Drinking alcohol can worsen some health conditions such as diabetes, high blood pressure, congestive heart failure, liver problems and memory loss. Alcohol is also a risk for aging adults who suffer with mood disorders, depression and anxiety.

Alcohol use when taking certain medications is another concern when caring for older adults. People 65 and older take more prescription and over-the-counter medications and herbal remedies than any other group.  Drinking can cause certain medicines to not work properly. Other medicines can become more dangerous or even deadly. A few examples of medicines that can be harmful to seniors when mixed with alcohol include:

While there is no one-size-fits-all recommendation for alcohol use as we age, as caregivers we do need to be aware that alcohol use in seniors deserves special attention.

References
'Senior Health Series: Aging and Alcohol Use and Abuse', published by The National Institute of Health, (nihseniorhealth.gov/alcoholuse/ifyoudrink/
'At What Age Does Alcohol Go from Tonic to Toxin?,' by Jo-Ann Heslin, March 21, 2012, The Geriatric Mental Health Foundation, (gmhfonline.org/gmf/consumer)
'Alcohol Debate: How Drinking Affects Your Health,' published by MedicineNet.com,medicinet.com