Baxter, Minnesota
7957 College Rd , Baxter, MN 56425
(218) 822-3200
About Us Care Services Resources Areas Served Careers Contact Us Search
Would you like to save Baxter, Minnesota as your Comfort Keepers location?
Yes! Save Location
Find a Location

Caregivers of the Past 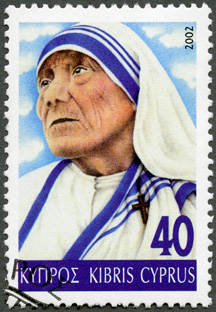 The white cotton habit, outlined in three royal blue stripes, is an iconic symbol associated with a woman who spent her life caring for the poor and destitute: Mother Teresa. Her selfless acts of kindness and remarkable work have been recognized across the world, and it is clear to see why she was the “mother” and caregiver for thousands of people  These characteristics, paired with her devotion to help those around her, is why Comfort Keepers at home caregivers are proud to spotlight her.

She defined her life by the following quote:

"By blood, I am Albanian. By citizenship, an Indian. By faith, I am a Catholic nun. As to my calling, I belong to the world."

Agnes Gonxha Bojaxhiu a.k.a. Mother Teresa was born into an Albanian family on August 26, 1910 in modern day Macedonia. She lived with her older sister, mother, and father. Her family were devoted Catholics, and her mother communicated the impact that charity could have on those less fortunate. Their home was always open to the deprived people of Skopje, Macedonia for a free meal. Mother Teresa’s mother said, “My child, never eat a single mouthful unless you are sharing it with others.”

In 1919, Mother Teresa’s father suddenly fell ill and died. After she turned 18, she saw her mother and sister for the last time and set off to become a nun for the Loreto Sisters of Dublin in Ireland. She then traveled to the Indian Order in Darjeeling and was later transferred to Calcutta to teach geography and history at Loreto Sisters’ Saint Mary’s High School for Girls.

In 1946, at the age of 36, Mother Teresa was riding on a train back to Darjeeling, India and received a message from God. God told her to stay in Calcutta and become a caregiver to the poorest of the poor. After gaining permission to leave the order, Mother Teresa left for the slums of Calcutta to open her own school.

Her caregiving expanded, and in 1950 she created the Missionaries of Charity. Today, more than 4,000 sisters and 300 brothers staff the Missionaries of Charity with 610 missions in more than 123 countries. MC  is open to "the hungry, the naked, the homeless, the crippled, the blind, the lepers and all those people who feel unwanted, unloved, uncared for throughout society, people that have become a burden to the society and are shunned by everyone."

The first Home of the Dying was opened in India due to Mother Teresa. She said, “a beautiful death is for people who lived like animals to die like angels—loved and wanted.” Shortly after, she also opened an orphanage for the homeless and abandoned youth.

Because all of her projects were free for those who entered under her care, money was often hard to find to support all the people. However, her work started to get recognized by public and government officials. Hundreds started to financially support her from all over the world and acknowledge her for being a gallant caregiver.

Because of her “fame,” the Blessed Mother Teresa of Calcutta was able to call a cease-fire in the Siege of Beirut to rescue 37 children, manage international charities in more than 100 countries, and receive Gallup’s “Most Admired People of the 20th Century” award in 1999 and the Nobel Peace Prize in 1979.

After relentlessly working for decades, Mother Teresa’s health started to decline, and she died at the age of 87 in Calcutta. Following her death, Former U.N. Secretary General Javier Perez de Ceullar said, “She is the United Nations. She is peace in the world.”

Our at home caregivers are always excited to learn about other selfless individuals that lived there life in the name of helping others.  If you feel you know someone with these characteristics, or you poses them yourself, please refer them or apply online.  We are just as excited to add to our team of at home caregivers as we are to spotlight others, and to help those individuals start a legacy of there own.