Preventative Care: A Five-Step Guide for Seniors and Family Caregivers
While factors such as age, gender, and family history are beyond seniors’ control, preventative care can reduce the frequency and severity of conditions that develop. Here are five ways to practice good preventative care.
5 Tips for Living Well with Type 2 Diabetes
We've gathered some tips and resources for aging individuals living with type 2 diabetes to help them maintain physical and mental well-being.
The Respiratory System: Age-Related Changes & COPD
The respiratory system, like many of the other human systems (e.g., cardiovascular, digestive), is a wondrously complex and sophisticated arrangement of organs working together to maintain homeostasis.
Elderly Home Care and Depression
It is important to recognize depression symptoms when caring for an elderly loved one. While seniors aging in their own home can help them maintain their independence, it can also be isolating.
Diabetes Prevention and Care
Half of all Americans age 65 or older have pre-diabetes and are at risk for developing type 2 diabetes.
Pneumonia in Seniors: Prevention and Treatments
Pneumonia is an infection that affects one or both lungs. The disease can range from mild to severe, and can be fatal.
Living with Arthritis
One in five adults suffer from arthritis, and the majority of these are seniors. For older adults to understand the stages of living with arthritis, it’s helpful to talk about how the disease is identified, diagnosed and managed.
What Does a Heart Attack Look Like?
Most of us have a specific idea of what a heart attack looks like: someone feels an abrupt, strong pain that causes them to stop in their tracks and clutch their chest.
Dealing with a Cancer Diagnosis Later in Life
Being diagnosed with cancer later in life can be scary and overwhelming. A cancer diagnosis can make a person feel like their world is out of control.
Thyroid Disease and Seniors
As seniors embrace the golden years, they have many things to look forward to retirement, watching their children begin families of their own, playing with grandchildren, and hopefully enjoying a full life with the wisdom of age on their side.
Friday, April 13, 2018

Lyme Disease: What Seniors Should Know 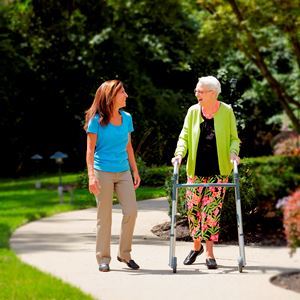 A Good Day Gone Bad
Ticks. These small arachnids get to us through a behavior known as questing, in which they perch themselves on tall blades of grass or plant stems and wait for something – or someone – to brush past. And that’s when they strike, biting down on the skin and attaching themselves to feed on the blood they crave. Research shows that, over the last few decades, the tick population in the U.S. has grown rapidly, and as a result, the number of cases related to the diseases they carry has also risen. Lyme disease, in particular, is of growing concern. While Lyme disease can be dangerous to those of all ages, it poses a much greater risk for seniors, whose immune systems are generally less effective.

The Importance of Early Detection
Tick bites are extraordinarily common, especially in the Midwest and northeastern areas of the U.S from April through September. Given their commonality, there’s a good chance that most people may remove the tick and simply move on, viewing them more as a nuisance and not thinking of what may be happening under the skin. What’s more, because of the natural anesthetic that ticks secrete when they bite, some may not even be aware that they’ve even been bitten (assuming the tick fell off on its own accord). That’s why it’s imperative for seniors to understand the early signs of Lyme disease. The sooner they begin treatment, the greater their chances of overcoming the illness.

Here’s what seniors should be on the lookout for:

One of the difficulties in diagnosing Lyme disease in seniors is that many of the symptoms mimic those found in other conditions and diseases commonly found in older adults. In fact, songwriter and actor Kris Kristofferson was misdiagnosed for years as having Alzheimer’s, when in fact the source of his memory loss was caused by Lyme disease. Detailed information, in this case, is paramount to diagnosis and treatment. If seniors report symptoms such as those listed above to their physician, it’s important to also let them know if there was time spent outside. If Lyme disease is detected, an antibiotic will be prescribed and the infection will heal within two-to-three weeks.

But as mentioned, time is of the essence when it comes to Lyme disease, and seniors should never shrug off the symptoms. The longer Lyme disease goes untreated in seniors, the harder it becomes to cure. And even if late-stage Lyme disease is treated, the lingering effects, such as fatigue and nausea, may never fully go away.

Reducing the Risk of Lyme Disease
Lyme disease is undoubtedly a great risk for seniors, but it should not deter them from enjoying the outdoors. Taking a few precautionary steps can help seniors avoid the bloodsuckers almost entirely. Before embarking on a walk or hike, it’s important to put on clothing that covers up the arms and legs, as ticks are more likely to attach themselves there. If it’s warmer out and longer clothing isn’t a sensible option, applying tick repellent product (with 20% DEET or higher) is recommended. Sticking to the center of trails or walking paths can also help, as can avoiding areas of high or thick vegetation, if possible. Upon returning from outside, seniors should also check themselves thoroughly for the presence of ticks or indications of a tick bite.

Comfort Keepers® Can Help
Getting to spend time outside can be a key component of our physical and emotional well-being, and at Comfort Keepers®, we want to ensure that seniors have the means to do so. Our caregivers can help clients dress appropriately for a hike or walk – with clothing that will reduce the risk of tick bites – and accompany them every step of the way. Call a local Comfort Keepers location to learn more about our caregiving services.

References:
Centers for Disease Control and Prevention. “Signs and Symptoms of Untreated Lyme Disease.” Web. 2018.
ThoughtCo. “How Do Ticks Get On You?” by Debbie Hadley. Web. 2017.
Interim Healthcare. “Are ticks dangerous for the elderly?” Web. 2018.
Next Avenue. “Kris Kristofferson’s ‘Dementia’ Was Lyme Disease” by Emily Gurnon. Web. 2016.