10 Activities for Seniors with Dementia or Alzheimer’s
10 activities seniors with Dementia and Alzheimer's can do with caregivers or loved ones to bring joy and consistency into their everyday lives. In these routines, there are plenty of ways for family caregivers to cherish great moments and memories together.
Preventative Care: A Five-Step Guide for Seniors and Family Caregivers
While factors such as age, gender, and family history are beyond seniors’ control, preventative care can reduce the frequency and severity of conditions that develop. Here are five ways to practice good preventative care.
Nutrition That Nourishes the Heart and Mind
No matter our age, eating food that nourishes is important for our bodies, minds, and quality of life. But as our bodies change with age, so does what we need to stay healthy. When older adults choose the food that nourishes them, they have the energy to do the things they love every day.
5 Tips for Living Well with Type 2 Diabetes
We've gathered some tips and resources for aging individuals living with type 2 diabetes to help them maintain physical and mental well-being.
The Respiratory System: Age-Related Changes & COPD
The respiratory system, like many of the other human systems (e.g., cardiovascular, digestive), is a wondrously complex and sophisticated arrangement of organs working together to maintain homeostasis.
Diabetes Prevention and Care
Half of all Americans age 65 or older have pre-diabetes and are at risk for developing type 2 diabetes.
Elderly Home Care and Depression
It is important to recognize depression symptoms when caring for an elderly loved one. While seniors aging in their own home can help them maintain their independence, it can also be isolating.
Pneumonia in Seniors: Prevention and Treatments
Pneumonia is an infection that affects one or both lungs. The disease can range from mild to severe, and can be fatal.
Living with Arthritis
One in five adults suffer from arthritis, and the majority of these are seniors. For older adults to understand the stages of living with arthritis, it’s helpful to talk about how the disease is identified, diagnosed and managed.
What Does a Heart Attack Look Like?
Most of us have a specific idea of what a heart attack looks like: someone feels an abrupt, strong pain that causes them to stop in their tracks and clutch their chest.
Friday, December 11, 2015 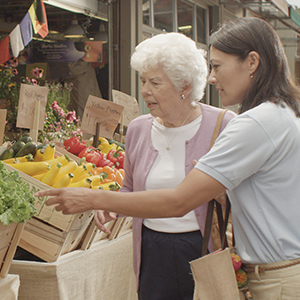 Did you know that gradual decline in memory and cognitive function can be attributed to elevated blood pressure? While there is no precise cause of cognitive impairment, an early indication of dementia, research strongly suggests that high blood pressure can add to the risk.

The onset of damage may hardly be noticeable, but the end result is not: High blood pressure leads to stiffened arteries that eventually deprive brain tissue of proper nourishment. A study in Lancet Neurology concluded that vascular brain injury quietly develops over a period of years, but comes on later in life with very noticeable effects. In fact, the brain can be prematurely aged by about seven years.

How High Blood Pressure Can Lead to Cognitive Decline

The brain has two layers. The cortex, an outer layer of gray matter, is filled with brain cells that play a key role in memory, attention, perception, language, and consciousness. An inner layer of white matter contains axons, the biological wires that carry information from one area of the brain to the other. Studies indicate that a reduction in blood flow caused by blood pressure is related to the plaque buildup in the arteries that damages nerve fibers in the white matter, and reduces the volume of gray matter.

These changes in the brain can result in cognitive impairment, beginning at age 50 or earlier. Cognitive impairment is a transition stage between the changes in understanding and memory that come with aging and the more serious problems caused by Alzheimer's disease. Like dementia, it can result from blocked blood flow to the brain when high blood pressure damages arteries.

In more severe cases, chronic high blood pressure can result in a series of small strokes that damage brain tissue. Over time, the damage caused by multiple little strokes can result in vascular dementia. Vascular dementia is the second most common type of dementia after Alzheimer's disease and produces symptoms that include confusion, wandering, and problems with short-term memory.

Studies indicate that the longer a person lives with high blood pressure, the more likely he or she is to develop memory loss and have difficulty thinking. This means that people with high blood pressure need to be proactive about lowering their numbers through lifestyle changes and/or medication ? as early and consistently as possible. Studies have found that those who have good blood pressure in middle age or in the early senior years have considerably less risk of notable cognitive decline.

Our caregivers, or Comfort Keepers®, can help keep a watchful eye on your loved one, and help incorporate healthier choices into his or her lifestyle. Our unique approach to personal care, Interactive Caregiving™, engages clients physically, emotionally, mentally and socially and provides a system of care that addresses safety, nutrition, mind, body, and activities of daily living (ADLs).